| JUS - 2010 - 3
Anno: 2010
ABSTRACT: The essay analysis the protection of the objects of art in the places of worship of the Catholic Church in Italy. The protection is establishet by the canonic law and the internal rules of the Catholic Church, by the laws of the Italian Repulic and by an agrement between the Conference of Italian Bishops and the Minister of Culture. KEY WORDS: cultural heritage, places of worship, agreement between Conference of Italian Bishops and Minister of Culture. SOMMARIO: 1. Premessa – 2. La disciplina canonica – 3. La normativa civile e l’Intesa del 26 gennaio 2005.
€ 6,00
Gli edifici di culto nella legislazione regionale digital

| JUS - 2008 - 2-3
Anno: 2008
Freedom of religion, protected by the European Convention on Human Rights, includes the realisation of places of worship. The essay shows the legal problems of places of worship in the evolution of State and regional laws, in relation with some international comparison, with the jurisprudence of internal courts, with law projects on fredom of religion.
€ 6,00
Gli enti ecclesiastici a vent’anni dall’accordo di modificazione del Concordato digital

| JUS - 2005 - 3
Anno: 2005
The essay shows the changes in the Italian rules about the corporations of the Catholic Church, also in comparison with the rules about the corporations of the other religions. These rules were strictly connected with the ecclesiastical property in the XIX Century, but they were changed by the Concordat of 1929 between Italy and the Holy See. Other changements have been introduced, after the republican Constitution of 1947 and the Vatican Second Council, by the agreement of 1984 for modification of the Concordat and by the law n. 222/1985, agreed by both parties. The essay shows the new problems borned after 1985, specially for the civil acknowledgement, their settlement and the rules about ecclesiastical corporations in the Italian unilateral legislation.
€ 6,00
Enti e beni della Chiesa Cattolica. Problemi di interpretazione della normativa pattizia digital 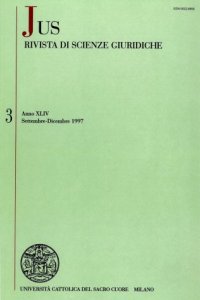 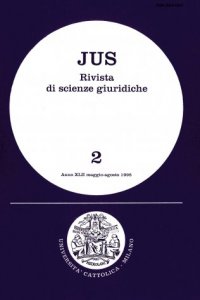 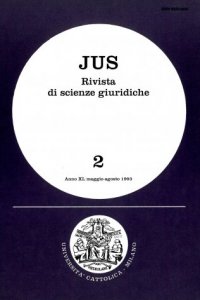